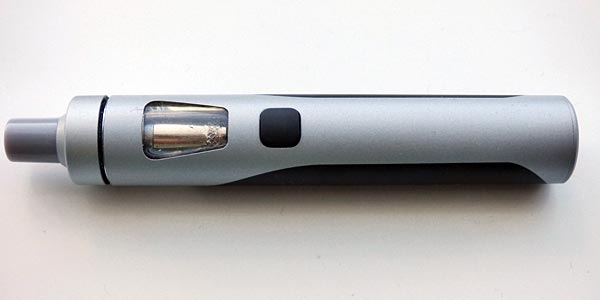 The eGo AIO by Joyetech is a discrete “pen” like device marketed at people who want to make the switch from smoking to vaping. The device has a 1500mAh battery capacity and the integrated leak-proof tank holds 2ml of E-Liquid. It features convenient top filling and the top cap is a child-proof design.

What’s in the box?

The eGO AIO is a nice and discrete device. It is also reasonably light and it feels comfortable to hold. The actual styling is kind of futuristic and I am not that keen on the two tone grey and black version that I received for review because it has a kind of plastic look. If I was buying one of these products I think I would go for either the full silver or the black which to me looks much better. Taste varies heavily between people so you might even like the styling. In terms of construction it feels decent and well put together. The fire button is comfortable and quite responsive with only a very slight rattle present.

The device does light up while you vape but on the plus side of things it means you can see the juice level in the tank if you are prone to vaping in the dark. It can of course be switched off.

The eGO AIO comes with two drip tips, a Delrin one and a Pyrex one. If you are serious about flavour then definitely use the Pyrex one even if it does tend to result in a lot of condensation build up. You can also swap it with a drip tip from your collection since the ones that I tried fitted without issues.

The tank holds 2ml of juice and is integrated into the device itself. In my opinion this is a shame since it makes things a little tricky when cleaning. Joyetech claims that the tank is completely leak-proof and I certainly did not come across any leaking while using this device.

What I really think is a superb feature is the child-proof top cap which offers parents some peace of mind if they should accidentally leave this device lying around. We have had child proof E-Liquid bottles for ages so a child-proof tank is an ingenious idea. The upper most section of the top cap allows you to adjust the airflow to restrictive mouth to lung vaping and more opened up where it becomes more of a restrictive lung inhale kind of vape.

The internal battery has a 1500mAh capacity which while decent enough for a modest user could be a little better. In fairness it is miles better than the limited capacity of the early eGO batteries that users like myself had to put with. The Micro USB port is located on the back of the tube just beneath one of the tank windows. There is a single air hole in the base of the device to provide battery ventilation. 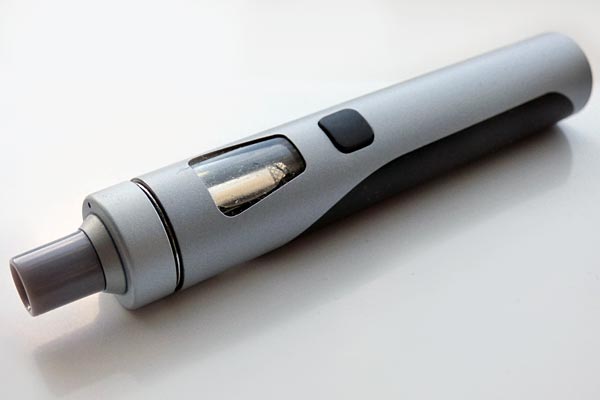 The included manual is actually rather good, everything is explained clearly along with diagrams and providing you take a few minutes to read it you will not run into any problems.

The kit contains two identical coils and neither is pre-installed. In my opinion this is a good thing because it means you will learn how to fit it and also how to prime it. It also means you won’t just fill up the tank, press the fire button and burn out the coil. First time vapers should definitely read the included Coil Priming Card.

The device does light up when you vape which I admit could get on peoples nerves. The light can be set to a choice of different colours and if you are really self-conscious about it you can thankfully switch it off. Switching the lighting off will also save a little on battery life.

To adjust the airflow you twist the upper section of the top cap. The most open setting is when both of the little dots are aligned with one another. To set the tank to mouth to lung there is not an indicated setting but I found turning the upper section ninety degrees to be perfectly fine for a very restrictive vape. 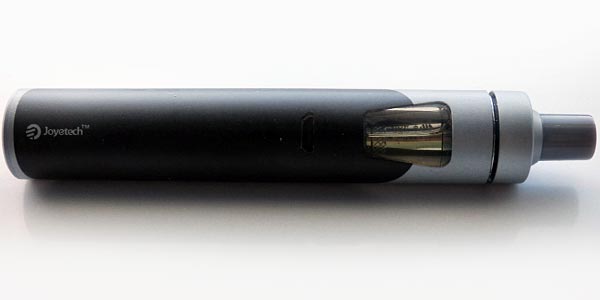 How does it vape?

Considering I use a lot of high powered devices these days I will be honest and say I wasn’t expecting a great deal from a starter kit, I’m not knocking these kits at all just pointing out that my vaping has evolved. However the eGO AIO actually really surprised me. I had primed the coil and filled up the tank with some Monarch E-Liquids Citadel. I set the airflow to mouth to lung and took my first vape and remarkably it was really nice.

Flavour was rather good, not at all washed out and I really liked the tight/restrictive draw because it was really close to what I was used to when I smoked. Vapour production was also rather generous and comparable to the amount of smoke a typical cigarette puts out.

With the airflow fully opened up you can do direct lung inhales but it is still quite restricted.  The vapour production increases by quite a degree but it is not as overkill as some Sub Ohm tanks. I guess you could compare the vapour production to the amount of smoke you would get if you put two cigarettes in your mouth and smoked both at the same time which I am sure plenty of us have done when heavily inebriated. No? Well perhaps that was just me back in the bad old days.

I did find that flavour was even better and crisper if you make use of the included Pyrex drip tip.

Tank capacity is a little limited but considering that you will be mainly vaping this device mouth to lung I don’t really think you will drain the juice too quickly. The device is not exactly high powered and you do have that nice top filling feature.

Providing you are a modest vaper the battery should last you all day long. Charging time was roughly 2-2.5 hours. 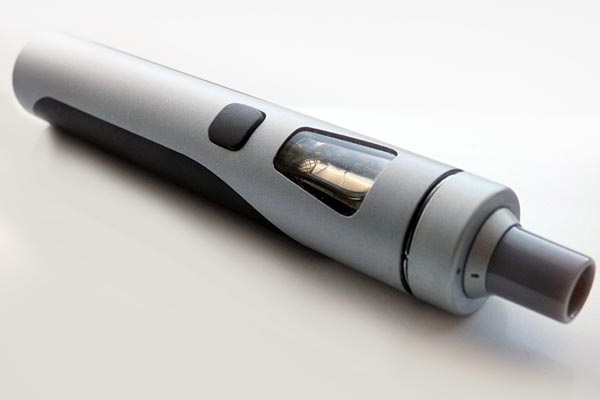 Out of all the starter kits I have reviewed recently I feel that this product is certainly one of the most suitable for people switching from smoking to vaping. The reasoning is simple, this product offers a dedicated mouth to lung vape which is nice and restrictive. The coils offer good flavour and more than adequate vaper production. In addition the airflow options will allow a new user to gradually adjust to lung inhaling should they ever wish too.

The product is extremely straightforward to use and safety features such as the child-proof top cap are very welcome if you have kids around.  There are a few things I am not so keen on, firstly the battery capacity which while probably acceptable for modest vapers could do with being a little bit better considering the competition.

Integrating the tank into the design is something of an issue since it means you have to be really careful when washing it out. Water could very easily make its way into the Micro USB port and we all know that water and electronics don’t mix. Personally if I was regularly using this device I would be tempted to put some masking tape over the port when cleaning.

I have read mixed reports about the coils that come with this device burning out quickly. They are actually the same ones used in the Cubis tank and to be fair to the manufacturer I have not had any issues with them so that could be down to a couple of dud batches. Of course you do need to keep in mind that I have only used this device for a couple of days but realistically Stainless Steel coils typically have a decent lifespan and you do get two in the kit.

In my opinion the good points about this product outweigh the negative ones and I feel that if you would like to make the switch from smoking to vaping then the eGO AIO is a very worthwhile product for a first time user.  I liked it a lot and I really wish I could have got one of these over three years ago!